Changing the Face of Computing – One Stitch at a Time.

In honor of Ada Lovelace Day, an international celebration of the achievements of women in science, technology, engineering, and math (STEM), Yasmin Kafai and Jane Margolis, reflect on the legacy of the British mathematician, who is famously regarded as the first female computer programmer. 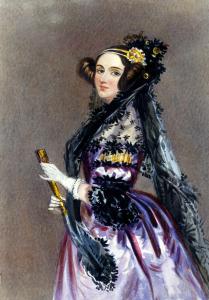 As we celebrate Ada Lovelace Day, we should be reminded that one of the first computers in the nineteenth century, the “Analytical Engine,” was based on the design of the Jacquard loom, for weaving fashionable complex textiles of the times. It was fashion that inspired British mathematician Ada Lovelace to write the code for the loom that wove the complex patterns that were in vogue. She also wrote a most beautiful sentence linking computing and fashion: “We may say most aptly that the Analytical Engine weaves algebraic patterns just as the Jacquard loom weaves flowers and leaves.” And yet, the historical and intimate relationship between fashion and computer science has largely been forgotten and ignored, even as Lovelace’s pioneering spirit lives on today’s runways.