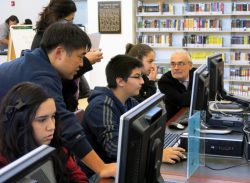 The University of California Los Angeles, the mayor’s office, the Los Angeles Unified School District, the nonprofit Code.org and several other groups kicked off the week Tuesday at 9:30 a.m. at the UCLA Community School.

The event highlighted the “Hour of Code” campaign, which gives K-12 students a one-hour lesson to demystify computer programming – or coding – and demonstrate how anyone can create innovative computer programs.

“Us four here are the only 9th graders in Computer Science at UCLA Community School,” student Jenny Martinez said. “But we want to extend that program.”